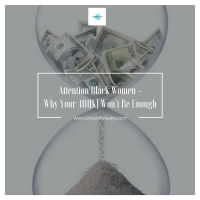 Attention Black Women - Why Your 401K Won’t Be Enough

Over the years I have had several conversations with friends and family members whom thought they would be secure in retirement because they have their 401(k). However, by way of my profession I was able to determine that for most women their 401(K) would not be nearly enough during retirement. As my peers and I have aged I see many of them are starting to di

scover what I’ve known for quite some time - their 401K will not be enough.

Your 401(k) is a great way to start investing. It is the foundation of a solid retirement plan, however as awesome as it is, 401(k)s do have some shortcomings. First is a limited choice of mutual funds, which can keep you from investing in high-performing funds on the market. The next is the 401(k)’s tax-deferral. Why is the  tax deferral a shortcoming? It’s because it works to your advantage while you’re saving, but means you will owe taxes on the money you withdraw from your 401(k) in retirement (when you need it most).

Another issue with using your 401(k) as your sole retirement vehicle is the gap in wages experienced by black women. It’s no secret that even educated Black women tend to be paid less than their white counterparts, as well as Black men for the same positions. For example, on average black women are paid $606 a week compared to $740 paid to white women and $708 paid to black men. The results of lower pay is that there is less money available to contribute to the 401(k), thus building your nest egg at a slower pace than your counterparts.

Berkeley's Odean and others have studied the effect of investment choice on 401(k) savers, and found that when investors choose their asset class allocation, a retirement income shortfall is more likely. If they can also choose their stock investments, the odds of a shortfall rise further. This effect is more profound with black women as financial and investment knowledge is usually lacking in our communities and social circles.

Another problem is that when 401(k) savers retire, they often opt to take their savings in a lump sum and roll the money into IRAs, which may entail higher fees and expose them to conflicted investment advice. A report by the Council of Economic Advisors found that savers receiving such advice, which may be suitable for them but not optimal, see investment returns reduced by a full percentage point, on average. Overall, the report found that conflicted investment advice costs savers $17 billion every year.

Yet another recent study - How Has the Shift to 401(k) Plans Affected Retirement Income? -

published in March 2017 by the Center For Retirement Research at Boston College found the following:

Understanding the history of the 401(k) allows you to see why it will not be enough.

The 401(k) account came about, as a clause in the Revenue Act of 1978. The clause said employees could choose to defer some compensation until retirement, and they would not be taxed until that time. (Companies had previously offered deferred compensation arrangements, but employers and the IRS had been going back and forth about their tax treatment.)

Anthony Webb, a research economist at the Center for Retirement Research has said "401(k)s were never designed as the nation's primary retirement system,they came to be that as a historical accident."

A benefits consultant named Ted Benna, who is often called the father of the 401(k) realized the provision could be used as a retirement savings vehicle for all employees, and in 1981, the IRS clarified that 401(k) plan participants could defer regular wages, not just bonuses, and the plans began to proliferate.

The ascent of 401(k) plans came as college costs started their steep rise, hitting many employees in their prime earning years. Stagnating middle-class wages also made it hard for people to save. Stagnating wages are even more of a problem for black women as black women face the double whammy of race and gender, even those who are educated tend to be paid less than their counterparts.

Fees have been another problem. Webb has studied 401(k) fees, and he concluded that "as a result of high fees, fund balances are about 20 percent less than they need otherwise be."

So What Should We Do?

What we should do is not as simple as writing one paragraph with one solution because it’s not that simple. It’s not a one size fits all solution. It’s an individualized solution based upon you and your families needs. We need to build solid well thought out, well rounded financial plans.  A well rounded plan consist of not only retirement accounts, but also includes real estate, insurance, money management, savings, other types of investments  and retirement vehicles.

We need to educate ourselves and our children about finances, empower ourselves with our knowledge and execute our plans. Take consistent action. We also need to share information, so that we can help change our communities as we change ourselves.